Bud Wilson was born in 1925 in the suburbs of Chicago, but forged his connection to the land and people of Northern NM when he was just 16, while accompanying his high school teacher on a research trip to San Cristobal. Bud served as a Navy Pilot, attended medical school and became a surgeon, practicing heart and general surgery for fifty years. He established surgical programs in New Mexico, Colorado, and India. In 1947 Bud began to buy a ranch in Lama NM and in 1985 Bud and Barb (his late wife) founded the Sangre de Cristo Youth Ranch Summer Camp, which continues to this day.

0:01 [Born approx. 1926] Grew up in the Northern suburbs of Chicago, high school student when he came to NM for the first time with his teacher, who was doing PhD research on DH Lawrence; so that took us to San Cristobal.

0:3:30 Bud worked in Kansas as a farm hand when he was 15, with an elder cousin. Put up 17 haystacks and filled a barn with hay. Teacher ran a camp that Bud helped with.

0:08 Took campers on backpacking trips including to Blue Lake/Forest Service

0:14 Met wife to be in Jenny Vincent’s kitchen

0:18 1948 Bud Completed College/Applied to Medical School
Discussion with Romero Family
Took Fabi Romero and other kids to the dance

0:21 Story of becoming a doctor – heard that a young woman died in childbirth, left a couple of kids without a mom, no doctor available, saw a local need. This sealed the deal on his decision to go to medical school.

0:22 Bought Lama Ranch Camp land from Reyes Martinez, who had been living on it for some years.
0:23:30 Nickname of Reyes Martinez was “The Fox” because we would turn the water on the ditch at night

0:24:26 Bud graduated in 1943 and knew he would go into the military. He enlisted in the Navy Aircorps program. He had been selected to be a night flyer if he had stayed in the military as part of the “Black Widows.”

0:27 “We had times when we were less than careful” in training.

1:25 Revisiting info about childhood and college

1:32 Heart Programs in NM
Sourced his philosophy from CO partners he’s worked with – everyone was equally valuable in the group and got the same salary, very different from most professional groups at that time. Took this philosophy when he started a private group in Albuquerque. Started first heart surgery program in NM; two other people had tried to start a heart surgery before and it didn’t work out.

He started a program at UNM (called Bernalillo Indian County Hospital at the time), very under-resourced and primitive conditions. Then moved to Presbyterian help start their programs.

1:48 When doing the camp with Iliu Romero, Bud (while still in medical school) met the Taos early doctors, description. He worked with Dr. Al Rosen and Dr. Deveau, good GPs in Taos.

1:50 Bud’s “Open ether” fainting story when helping with a surgery in Taos in the early days

1:52 Bud’s reflections on going into medicine, going where help was needed

1:55:30 Advice from Bud “Make choices for your life that help make the world a little better….one thing after another.”

1:58 Discussion of ¼ Mile hike up to his house through the snow. 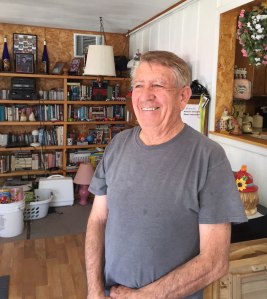 Flavio Cisneros is a retired history teacher, veteran, community leader and wonderful cook, committed to recreating traditional foods from his childhood in Questa.